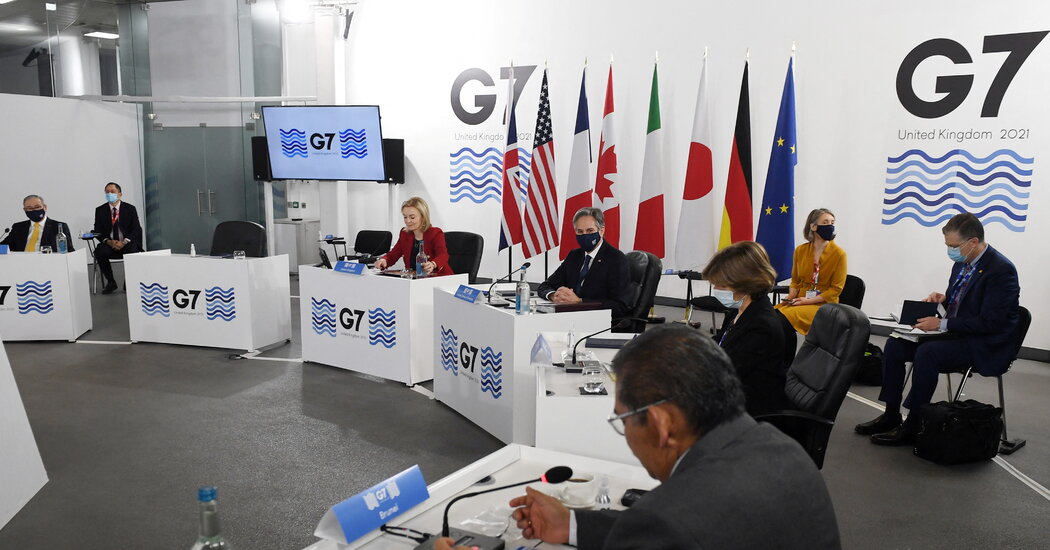 LIVERPOOL, England – Top diplomats from the world’s richest major democracies warned Russia on Sunday of “massive consequences” and “substantial costs” should it invade Ukraine or continue military aggression near its border.

The Foreign Ministers of the Group of Seven urged Russia to withdraw from the tense border situation and made it clear that all efforts to negotiate or otherwise avoid confrontation were welcome.

“Any use of force to change borders is strictly forbidden under international law,” it said in a statement. “Russia should have no doubt that further military aggression against Ukraine would have massive consequences and high costs in response.”

Their statement largely echoed earlier admonitions by Western officials last week after Russia rallied up to 100,000 soldiers on Ukraine’s eastern, northern and southern borders. On Tuesday, President Biden himself warned President Vladimir V. Putin on a two-hour video call of unprecedented and painful economic and other sanctions should Russia invade Ukraine, and called for de-escalation and diplomacy.

But he promised Putin some sort of diplomatic discussion on European security that has already worried some American allies.

Mr Putin has set out a number of Russian goals that seem impossible to achieve, including a written NATO guarantee withdrawing a 2008 NATO pledge to admit Ukraine and Georgia to the alliance at some point in the future (a demand which Washington has already refused), and the promise not to station weapons in countries bordering Russia or to hold military exercises a certain distance from Russia.

Sunday’s warning also included Japan among countries now condemning Russia’s military rearmament, and it was issued separately from ministers’ round-up of a number of issues discussed – including the complicated relationship with China and Iran and the intensification of the distribution of the Coronavirus vaccine – after two days of meeting in Liverpool in the north of England.

“What we showed this weekend is that the world’s largest economies are united,” UK Foreign Secretary Liz Truss told reporters in Liverpool. “We have sent a strong signal to our opponents and our allies. It was clear to us that every Russian incursion into Ukraine would have massive consequences that would be associated with considerable costs. “

Foreign Minister Antony J. Blinken repeated this on NBC’s “Meet the Press” on Sunday, adding that deterring Russian aggression was about “the basic rules of the way of the international system”.

“One country cannot exercise any sphere of influence over others,” he said. “That’s what Russia claims to say. And if we leave that unpunished, then the entire system that ensures stability and prevents the outbreak of war is in danger. “

The Group of 7 – Great Britain, Canada, France, Germany, Italy, Japan, and the United States – makes up about half of the world economy. Diplomats from the European Union also took part in the talks.

Officials said Russia’s military might be ready to invade Ukraine as early as January or February, although there is no evidence that Mr Putin chose to do so.

Intelligence information released by the United States suggested that the Russian military had developed a war plan that called for up to 175,000 soldiers to pour across the Ukrainian border – a force that the Ukrainian military barely did, despite U.S.-provided equipment and training could stop.

Mr Putin has denied concerns about the build-up of troops on the Ukrainian border, saying instead that the United States and the North Atlantic Treaty Organization are threatening Russia’s security by providing weapons and training to the Ukrainian military.

On Sunday, Putin’s spokesman, Dmitri S. Peskov, said the Kremlin was ready to continue what he called the already substantial talks about “the current confrontational situation in Europe over Ukraine,” according to the Russian news agency. Interfax.

“This is precisely with the aim of further demonizing Russia,” he said in an interview on Sunday, according to the state news agency Tass.

The statement by the Group of Seven Ministers did not specify the penalties Russia would face in the event of an invasion. The White House has warned it is ready to take unspecified steps against Russia, which the United States resisted in 2014 after Putin’s government annexed the Crimean peninsula in Ukraine. It could also lead NATO to reposition its troops in Europe.

A senior Foreign Office official who attended the Liverpool talks said the joint statement shows that the Group of Seven and the European Union are “absolutely united” in imposing harsh penalties on Russia if necessary. Given the debate over Russia’s exclusion from the global financial settlement system known as SWIFT, this was a remarkable description that some European officials feared would provoke too harsh a reaction.

Understand the escalating tensions in Ukraine

Ominous warnings. Russia described the strike as a destabilizing act in violation of the ceasefire agreement and raised fears of renewed intervention in Ukraine that could drag the US and Europe into a new phase of the conflict.

The position of the Kremlin. Russia’s President Vladimir V. Putin, who increasingly portrays NATO’s eastward expansion as an existential threat to his country, said Moscow’s military build-up was a response to Ukraine’s deepening partnership with the alliance.

“We reaffirm our unwavering commitment to the sovereignty and territorial integrity of Ukraine,” the statement read, adding that the signatories would “intensify our cooperation in our common and comprehensive response.”

The senior foreign ministry official described the summit as “a very intense round of meetings,” which also raised concerns about the commandos of the Wagner Group, a Kremlin-affiliated private mercenary force, in Libya and elsewhere in Africa. The official accused the private force, which was also deployed in conflict zones in Belarus and across the Middle East to advance Russia’s interests, of causing “extreme problems” in the Sahel, but failed to elaborate.

The official reporters, traveling with Mr Blinken, on condition of anonymity, discussed the diplomatic talks in Liverpool more openly.

The Foreign Ministry is sending a senior official to the Ukrainian capital Kiev and Moscow this week for talks to ease tension. But the trip by official Karen Donfried, the assistant secretary of state overseeing US policies in Europe, will also “strengthen US commitment to Ukraine’s sovereignty, independence and territorial integrity,” the ministry said in a statement.

In addition, British Foreign Secretary Truss reiterated her warning that the recent rounds of nuclear talks between the world powers and Iran represent Tehran’s “last chance to come to the negotiating table with a serious resolution”. Diplomats are trying to revive the 2015 deal – from which the Trump administration withdrew the United States in 2018 – that curtailed Iran’s nuclear program in return for easing US financial sanctions.

But eight months of negotiations after Mr Biden took office and signaled his intention to rejoin the deal, it has been a tough one from new leaders in Iran demanding that sanctions be lifted before agreeing to other terms suffered fatal setback.

The seventh round of the talks continued in Vienna on Sunday. They recently resumed after a hiatus of more than five months during which Iran elected a new tougher government.

Germany’s new Foreign Minister Annalena Baerbock said in Liverpool that “the time is running out” for a deal. Iran has tried to reject compromises from previous rounds, she said. The last round, she told reporters, “has shown in the last few days that we are not making any progress.”

China and Russia have shown more patience with Iran and said the talks are progressing, albeit slowly.

“Iran still has time to come and agree to this agreement,” said Ms. Truss.

The senior State Department official said the Liverpool talks included options for action against Iran if the nuclear talks fail.

Steven Erlanger contributed the reporting from Brussels and Mark Landler from London.